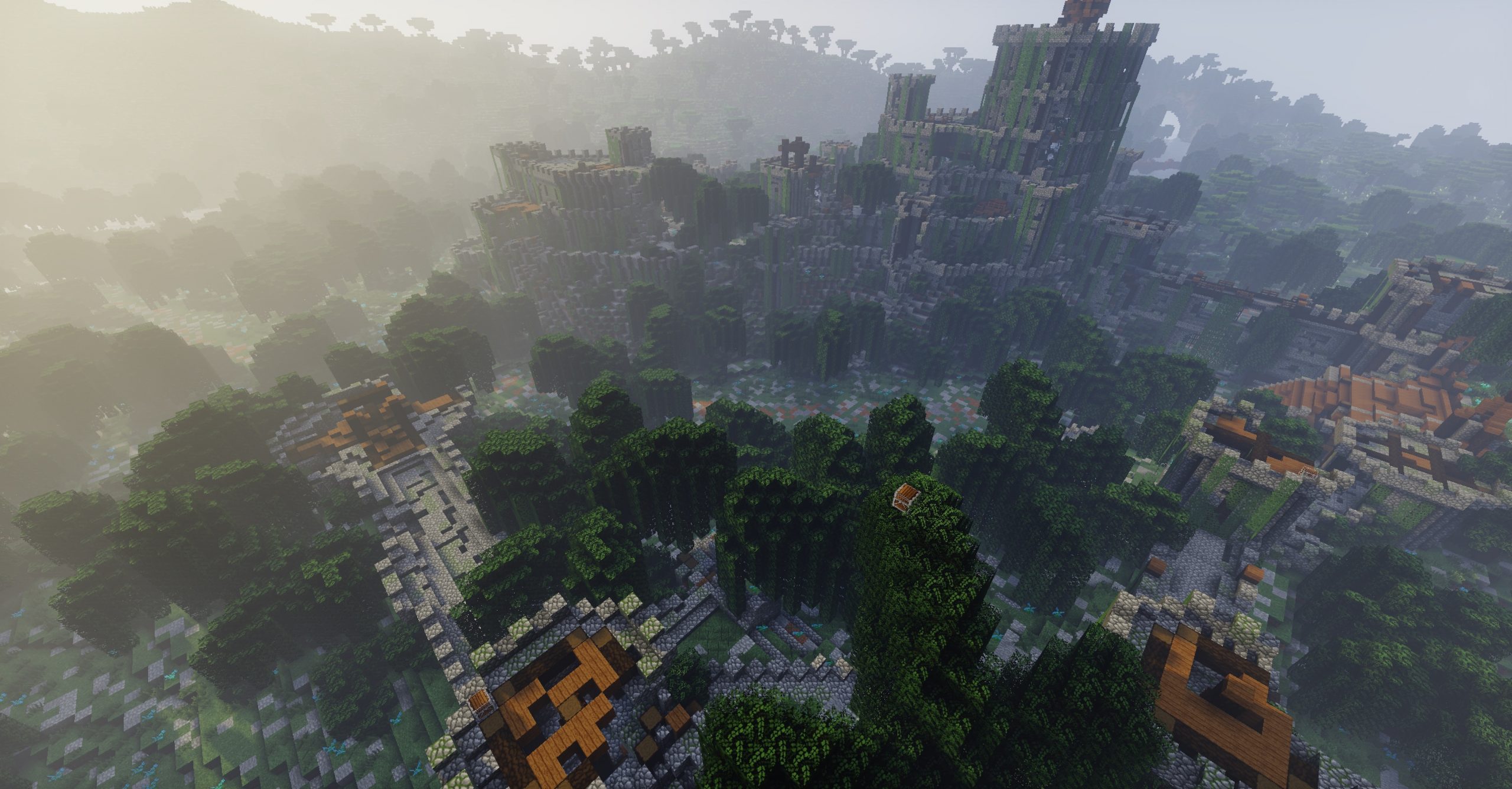 6 months have passed since the last news on our site, and it’s time to make a review this beginning of the year 2018 because we have a lot of things to say.

To begin with, we were able to complete the Ouranos dimension. We are happy because it is a dimension that has become original and much larger than in Across The Time. It took us a lot of time, the terraformation was very consistent to do (we already gived more detailed in the last news).

Speaking of terraforming, we decided to rush this part of the map to prepare for the changes brought by the future update 1.13, where it will be necessary from there to focus much more on the systems.

We recently finalized Tellurön in terraforming to have a beautiful and great map. To avoid showing you too much, we will not reveal the entire map.
However we can deliver you one more photo of Tellurön :

Also great news, we decided to start the last big construction of the map : the dungeon of time.
A lot of work is waiting for us with this one because we aim to make an interesting final and the principle of the dungeon will revolve around a theme that is quite well understood in the name of our map : the Time.

Indeed, there will be temporal distortions with trips more or less short in time that will be essential to advance in your quest.
We do not tell you more, we have already started. All we can give you for the moment is some sketches (this shows you a little our method of work before building in Minecraft) :

Before starting things a little more technical with the gameplay systems, we wanted to prevent and thank two people who have recently joined the team time to help us finalize Across The Time 2.

Firstly, “Bonkoul” helps us build some small secondary areas that will be used for quests or to hide some treasures. For the moment we can not list them because there are many and we do not know yet the purpose of each of these sites at 100%.
What we can tell you is that we have already placed more than 1600 chests on the map (all dimensions combined) and that there is more than 30 Panorama to discover. And all this without counting the side quests.
But we will not detail everything now because it would be too long, we will make an article with all the important figures when the map is about to be completed.

Secondly, another very generous person “Slapilou”, came of his own free will to help us transcribe our texts (dialogues and story) in English. We had just started the translation, and that relieves us greatly especially when this person knows enough and deals independently to do this work.

Also not to forget, end of the year 2017 we have also worked on the resource pack, re-texturing many blocks and items but also looking for new sounds.
Rather than writing too much on the subject, it would be easier to put you directly pictures to see the evolution made in texture :

Now that it’s done, let’s go into the abysmal depths of systems… Finally we will still stay on the surface, because it can be quite technical for some and we prefer that you retain the very good results that we managed to rather than the method.
The 1.13 is planned for this spring with as super new, the aquatic update. Regarding the novelties of the 1.13, we will see them later, however as said many times, the commands will be modified.

So we can tell you that we have started to anticipate the release by transferring the commands systems to “functions”. That is, all blocks of orders will disappear to be transferred to “json” files.

Thundesrtruck did not wait for 1.13 to get started, now the central gameplay systems were updated “functions”. We gain in power but also in ease of operation. However, we are losing in rendering photos, because the systems are just simple lines of code and it’s a lot less impressive than the labyrinthine system of commands_block ^^.

Let’s go back to some numbers : the number of scoreboards created (dummy and others confused) exceeds 200 now on the map (not counting that within each scoreboard are sometimes created dozens of variables and timer).

All these variables and tests that are caused by the “scoreboard” are essential to calculate all our gameplay systems. Minecraft offers an unlimited number of possibilities and even if the 1.13 will offer even more, but we will still stop implementing new system too greedy resource.

Exactly, these last systems that we implemented must be absolutely mentioned in this article. Indeed we have of course created the magic system where it still lacks the majority of spells, but we mainly created the biggest gameplay system of the game : the leveling!

As stated from the beginning Across the Time 2, we have always hoped to make a real system to increase power by level in Minecraft without using plugins or mods.
Now it’s done thanks to the functions and especially the work of Thundesrtruck (who loves to develop the gameplay systems ^^).

The level, which we call “Rising”, will allow us to define the player’s power throughout his adventure.
At each of these levels the player will be able to win:

The sharing of heart and Dahäl will be done automatically while Skill points can be spent in different categories on choice, at the weapons master.
The maximum level that can be achieved by the player is set to “50”.
But we have not overlooked the end-game because after this maximum level, additional ranks called “Master” can be won again.

Thus the player can continue to evolve and increase in power even after completing the entire main quest.
But you will have to be well equipped (patience also ^^) to slay these monsters, because the more you earn higher levels you will be powerful, but the more the next levels will be hard to get.

We have calculated the levels precisely thanks to a small formula that allows you to define an exponential scale, giving you more and more difficulty in reaching the full potential of your character.

Be aware that at the moment we have defined the power of the monsters in relation to the player’s level with a “normal” difficulty, which is to say that the monster will also have a power level that will adapt in part to the players level, the difficulty of killing a monster will be indicated by a coloured symbol above their head.

We are not going to give you any details, because monsters will also have a rank with a power scale depending on the region and a category that can be minions as elites.

Anyway, all that to say that after now more than 4000 hours of work, we arrived at 3/4 of the map.
However, we are still quite cautious about the percentages of finishes, because 1.13 take time to out, and it is surely from the spring that we could better evaluate the work that remains to be done and determine a much more accurate counter.

We have so much to say about this map that we are certain to forget many things, but you will discover them soon enough, hoping at the end of 2018 on a BETA (French only).