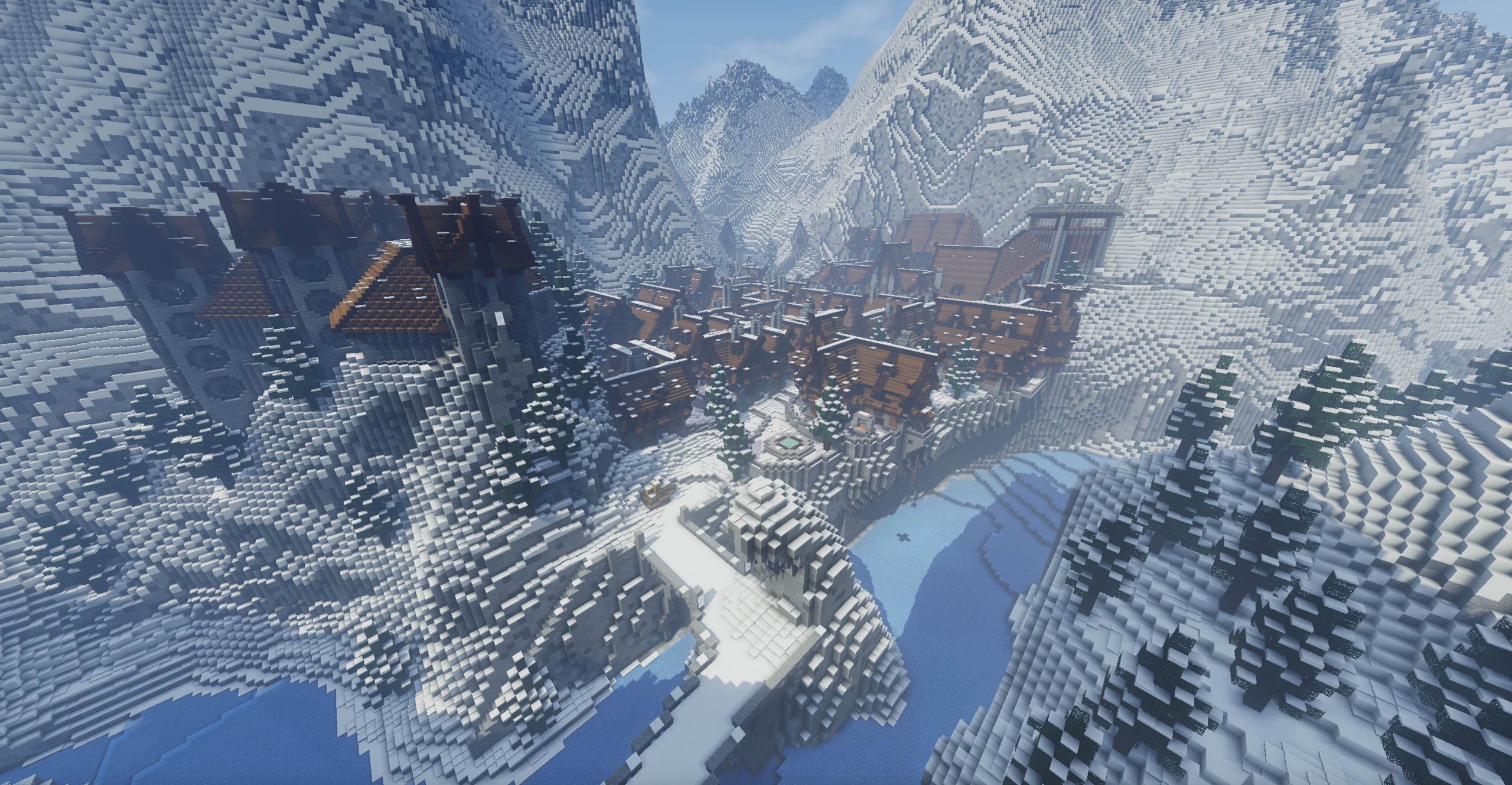 It was time to make a first point of the work on the map at the beginning of year 2017. This winter we have made significant progress in advancing construction and terraforming.

Indeed, we will start this article by showing you the city of Eolorion. A very old city rooted in history of silberländ with his palace of masters of Dahäl.
This town, impregnable, was built in the bowels of the mountains of Elcheol.

But a biome as large as the Elcheol mountain range without great construction was inconceivable, which is why it was absolutely imperative to build a dungeon! We will of course refrain from revealing the scenario to you, however each large dungeon of the region will be an increasingly hard and long challenge to face exclusively for the main quest of the game.
Here is a photo of the Vonaheim Dungeon :

Now that you have an overview of the progress made in construction and terraformation, let’s move on to the other points on the map that were not neglected during these first two months of the year.
Already to avoid long speech, here is just another photo still representing blocks that were updated in 32×32 for our resource pack :

Some blocks have been sacrificed to improve some aspect of the gameplay or visual of the map, however with the arrival of the 1.12 version of Minecraft and many new blocks, we think we will update the map to version 1.12. We look forward to it!
Speaking of Minecraft version, we have updated the map to 1.11.2, it was not exactly easy but the systems work almost perfectly, some still should evolve.

In order to show you a little these evolutions made on the blocks of commands here is another photo gathering some systems of the map :

In the bottom left frame is the system in command_block of the « GPS ». If we talk about it, is that this new system is extremely practical and efficiency, it was finally created to help the player to orient himself in his quests.

As we have said many times, « Across The Time 2 – Time For Regrets » will include many more side quests and possess an universe far wider than its predecessor. But a problem has arisen in Minecraft because we are doing the maps adventures in Vanilla and the game has no Mini-Map.

Several systems were so thought but has been abandonned because impractical and not precise enough. But recently Thundesrtruck in made a which is always very effective at the level of precision and ease of use. It’s a system that works on the principle of triangulations coordinates. Here we serve only a plan in 2 Dimensions (X, Z), it’s all that matters because if the player is lost will know the azimut and find the goal he seeks. The height will no longer be a problem after.

The choice of the objective (primary or secondary) will therefore be possible thanks to the help book quests. It will be enough so that the lost player activates the system by a simple click in this help book quest he will then choose in the chat. An arrow will appear directly above his head indicating the precise direction view of the goal. In order to evaluate the distance between the player and the objective, the arrows will have 8 different colours. The red will mean that the player is still far from the goal, then when he comes near it will turn to orange, then yellow to finish by shades of green.

For you to illustrate the result of the GPS, here’s a GIF in just a few images representing the player lost but helped by the arrows appearing every time he asks the direction of the quest :

We hope that these articles will make you want to continue to follow and support us. We are looking forward to see this very ambitious project on many aspects come out.
If you like reading, we will end by referring you to a Lore written by Thundesrtruck that we recently shared on the site at this address : https://adventquest.com/across-the-time-2/lore/the-hunter-of-worlds